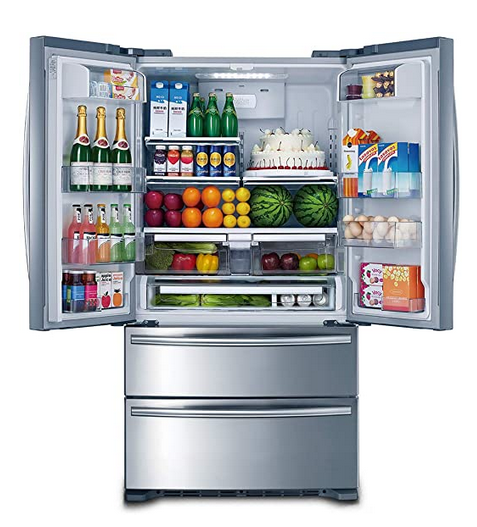 Perhaps you’ve watched the popular Netflix series Grace and Frankie staring Jane Fonda as Grace, and Lily Tomlin as Frankie. In one scene, Frankie is in her kitchen doing battle with her refrigerator. She has just closed the refrigerator door but forgotten the butter, so she attempts to open it again.

Using all of her strength, she finds that she cannot open the door because the refrigerator has a vacuum seal so tight, even Godzilla could not open it. Frustrated, Frankie forces herself to count from one to ten, until the prerequisite time has passed and the seal is released. It’s a comical scene and perhaps one that many of us can relate to.

I certainly can. I recently moved into a new home that happens to have a refrigerator just like this. Like Frankie, I found myself becoming annoyed and impatient every time this happened, until one day I took a moment to coach myself.

“Look, this isn’t going to change,” I said. “You won’t be running out to buy a new fridge anytime soon so you’ll have to adjust your attitude and your relationship to this appliance.”

The first step in correcting my behavior was to observe my thoughts. Certainly I felt justified in telling myself that I should not have to be  inconvenienced by a refrigerator door that literally sucks. Yet I could see just how futile these feelings and thoughts were. I had to replace them with a more positive and productive mindset. But how? And what were the advantages to approaching this situation differently?

Indeed, this was going to require that I slow down, way down, and become 100 percent present every time I opened the fridge door, thinking carefully about everything I would take out or put back into the fridge. In this world of multi-tasking, focusing on one thing this intently had almost become a lost art for me, so already I could see an advantage here.

By adjusting my approach,  I found myself becoming more patient, first with myself then with the fridge. I even began thinking such pleasant thoughts as “what a privilege it is to have a fridge. Not so long ago our ancestors had to purchase a large block of ice every few days.”

Surprisingly, with my new found patience, I then began finding myself feeling gratitude to the wonderful people who invented this thing called a refrigerator, the factory workers who assembled it, the company that distributed it, the trucker who brought it here, and the person who installed it. There were many hands, much labor, material and resources that went into making such a miraculous appliance. Why get irritated when I could be feeling gratitude instead? Another advantage appeared.

It was a lot more pleasant to feel appreciation than aggravation. It seemed that no longer was I just opening a door to a fridge — I was now opening a door to my own mind and how it could serve me better. This was good.

As my mind opened further, I found a feeling of awe emerge, over the simple fact that I had an abundance of food in my fridge. I had never given pause to reflect on this. Yes, I have said grace and thanks many times at the beginning of a meal, but never have I simply gazed at the food in my fridge to see it as the gift it truly is.

Those perfectly ripened tomatoes, avocados, berries, salad mixes, walnuts, bell peppers — you name it — all planted by farmers, picked by migrant workers, and trucked to me ever so conveniently. I gave thanks to these individuals and to Mother Earth.

Finally, I allowed myself to keep the fridge door open as long as I wanted— without feeling guilt or shame. No longer did I hear that persistent voice I grew up with telling me to get in and out of the fridge quickly and to close that door. Who among us has not heard those instructions?

How could I have ever imagined that a refrigerator door could teach such lessons? Truly this was food for thought. We are given ample opportunities daily to apply mindfulness. It is fascinating to see that from mindfulness and patience comes gratitude, and from gratitude comes compassion for self and others, and from compassion arises a state of joy, harmony and inner peace.

New York Times bestselling author and internationally renowned speaker Carolyn Myss tells the story of a woman who was in a car accident. Badly injured, she had left her physical body and rose above the scene below, watching the ambulance fight its way through heavy traffic to reach her. In her near death state she witnessed the traffic jam and discovered that she could actually “see, read, and know” the thoughts that were arising from the hundreds of drivers who were stopped in their cars. Almost all of these drivers were having thoughts of frustration, annoyance, and anxiety.

As she scanned the scene further, she became aware of one person who was actually praying for her. These prayers gave her such comfort, strength, and hope that she made a mental note of the license plate of the car from which they came. When she recovered, she researched who the car was registered to, contacted the owner, and personally thanked that individual for helping to save her life.

How we respond to every situation can be an opportunity for our growth. What we say, think, and do can lighten the load, not just for ourselves, but for our fellow human beings. Sometimes we need to count to ten, then make a better choice.