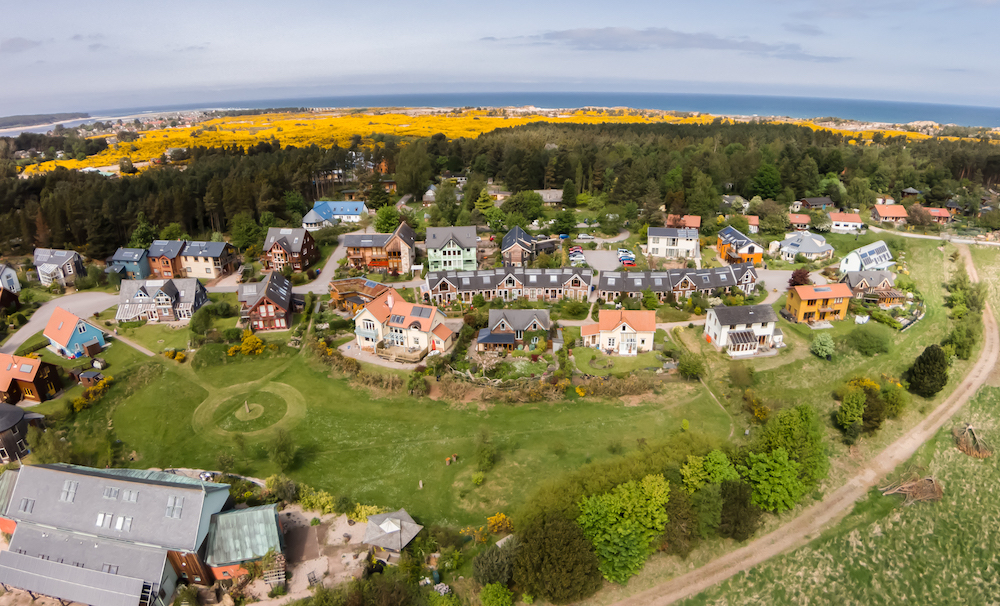 Years ago, I read a wonderful book by Paul Hawken called The Magic of Findhorn.  It was about an eco-village located in Findhorn, Scotland. The community was co-founded by Peter Caddy, a retired military officer and hotelier, his wife Eileen, and their co-worker and friend Dorothy Maclean. Findhorn had gained world-wide notoriety for such phenomena as growing forty pound cabbages in poor soil conditions, and roses that would blossom in the snow.

Having finished the book, I reflected on how much I really (and I mean really) wanted to personally meet Peter. We both had once held similar jobs in the military. He had been a catering officer in the Royal Air Force and I had been a club officer in the Navy. Yet Peter was living a far more courageous existence than I.  I wanted to know more about the principals upon which this community was founded, which included navigating by “spirit-guided intuition”.

In 1962 the Caddys and their friend Dorothy were suddenly let go from their positions working at the Trossachs Hotel.  Though they had made many attempts to find employment elsewhere, their efforts proved unsuccessful.  With options dwindling, Eileen relied on her intuitive guidance to direct them in their next steps.  They were to take a caravan trailer that they owned to the nearby Findhorn Bay Caravan Park where they would set up living quarters for themselves and the Caddys’ three children.

The only available spot for them to park their tiny blue caravan was next to a rubbish dump. Peter soon began converting the area around their cramped caravan into an organic garden. Dorothy engaged the energies and intelligences of nature by tuning into the plant devas and fairies for assistance in working with the difficult sandy terrain.

Over time, their humble gardens became legendary due to the sheer size and scale of the award-winning vegetables and fruits that were being grown there. This attracted global media attention as did the story of Peter, Eileen and Dorothy’s curious approach to living by intuitive guidance.

Since its humble beginnings in the 1960s, Findhorn has become one the world’s largest and most successful spiritual and ecological communities. To date, thousands of residents from more than 40 countries have either lived, studied, or visited there.  They offer trainings, publications, and experiences in sustainable living.  (www.Findhorn.org)

Two years after having read The Magic of Findhorn, a good friend called one day and asked if I could put up a visitor.   Several hours later, I opened the front door of my home and there, smiling at me, was Peter Caddy. I was stunned and almost speechless. My original desire had finally materialized. The lag time had been two years.

My week with Peter was entirely life changing. Our time was spent in joyous, uplifting conversation in which I learned a great deal.  Peter would return throughout the years to stay with me, as he traveled the world giving workshops and lectures.

I learned that Findhorn was a test tube for practicing non-linear ways of creating and manifesting.  The founders first had to believe that their needs would be taken care of, even while unemployed and living in a trailer park next to a dump.  By listening to intuition, they were guided to step out in faith and take action. Time and again, the resources and the means to pay for what was needed would show up as they surrendered to the process.

One of the more unusual and popular classes offered through Findhorn was a course in manifestation.  After a few weeks of training and orientation, students were given an opportunity to conduct their own experiment in living through intuition. With just $50 in their pockets, they were to spend the next six weeks in Europe without using credit cards, getting a job, or relying on any of their own financial resources. They were to apply what they had just learned.  Upon returning, everyone would share their fascinating stories.

Peter delighted in telling me one of the more memorable accounts that had emerged from this course. It took place during a manifestation training he conducted one summer in Greece.

A professional couple from New York completed the training then set out on their six-week adventure. They had been scraping by and diligently saving their money by staying in a series of small, dingy hostels.  However, three days into the experiment they were entirely miserable and had begun to question their own sanity.  Were they completely delusional?  How could they have fallen for this ridiculous scheme?  They decided to find the best restaurant in town.  Counting their remaining $36, they vowed to celebrate their stupidity, live it up, then get on the first plane back to New York.

The restaurant was virtually empty save for a man dining by himself. The couple ordered a bottle of wine, a delicious dinner, and continued poking fun at themselves for being lead on such a wild goose chase. The single gentleman found himself attracted to their levity and enthusiasm. He finally got up, came over, and asked if he might join them.

He spent the night celebrating with the couple and at the end of the evening turned to them and said, “I have had such a delightful time with you both. I am a writer and a reviewer for one of Europe’s most prestigious travel guides. Therefore, I have a very generous expense account. Would you consider being my guests, all expenses paid, for the next six weeks? I would so enjoy your company.”

This story of manifestation is not only astonishing, but it reveals something even more profound.  The couple got clear that they were not willing to scrape by nor live hand to mouth just to make the experiment work.  Once they decided to really enjoy themselves in style, the universe came forth and delivered a wonderful solution.

We can probably all think of situations when we pressed on, not having any idea how certain desires might come together, but expecting they would — and they did. Perhaps we wrote them off as coincidence. But were they?

What if we do possess manifestation capabilities, but do not have the scientific knowledge at this time to prove how this works?  After all, absence of proof is not proof of absence. It had taken two years for Peter to show up in my life. That was a very narrow and specific event. It took three days for the couple to encounter one possible way to spend their six weeks in Europe.  You could say that in the latter case there were numerous possibilities available and the one that emerged resonated most with what they were seeking.

There are many self-help books espousing these ideas. I remember years ago reading Tony Robbins’ Awaken The Giant Within. One point he made was that we all have laundry lists of goals and needs which are mainly comprised of material acquisitions, positions of status, or social relationships. Yet upon close examination behind each of these desires, there is always a feeling.

Tony suggested it was important to get in touch with the feelings that we are really desirous of, not necessarily the material items themselves.  His recommendation is to avoid focusing on the things we think we need, and instead concentrate directly on the feelings we desire such as being joyful, healthy, fulfilled, purposeful.

We can’t walk into a gym and expect muscles the first day, but we can enter with a strong sense of determination.  We are all living in the unknown, even more so today given the uncertainties of the corona virus.  I pose this not as an absolute, but as something to think about and engage in, especially while we have the time to do so.