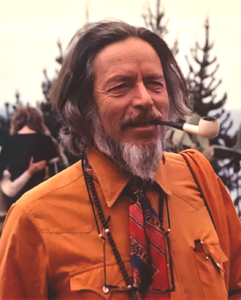 Decades before the digital revolution reshaped our lives, the ethnobotanist and shamanologist Terence McKenna speculated that one day we might all live on posthumously through our websites. This concept of a digital footprint of immortality was not well defined 30 years ago, but today, and indeed after McKenna’s passing in April 2000, it has become a powerful tool for legacy building.

So too it is with Alan Watts, a British writer and speaker known for interpreting and popularizing Buddhism, Taoism, and Hinduism for a Western audience. Through the efforts of his son Mark, the Alan Watts Organization, and the Ram Dass Be Here Now Network, a digital library of over 200 hours of Alan Watts’ recorded talks have made their way to a global audience, and none too soon.

For those who, like myself, have not previously been exposed to the ideas of Watts, nor are aware of his deep influence in the American countercultural era of the 1960s, Watts’ lectures on Zen philosophy, recorded some 40 years ago, are like stumbling upon a gold mine.

His entire archive provides much needed medicine for our moment in time — a moment defined by  fear, anxiety and chronic worry about the innumerable possibilities of what might go wrong.

Born in the village of Chislehurst in Kent, England, Watts showed an extraordinary interest in and understanding of Buddhism as early as the age of 16 when he wrote his first essay for the journal of the Buddhist Lodge in London. In 1938 he moved to the United States to begin formal Zen training in New York.  Shortly thereafter, he enrolled in Seabury-Western Theological Seminary, received a master’s degree in theology and was ordained in 1944 as a minister in the Episcopal Church.  At the invitation of Dr. Frederic Spiegelberg, Watts moved to San Francisco in 1951 where he began teaching Buddhism at the American Academy of Asian Studies (now the California Institute of Integral Studies).

A prolific author and brilliant speaker, Watts wrote more than 25 books and articles on religion and philosophy.  The Way of Zen (1957), became a bestseller on Buddhism. Audiences would fill bookstores, auditoriums and college halls to hear his deep discourses on metaphysics and mysticism.  Though he had no formal training as an orator, his ability to unwrap complex philosophical ideas and deliver them with precision and humor mesmerized his students and followers. It didn’t hurt that he had a commanding voice, delicious vocabulary and an alluring British accent, all useful tools in punctuating every word with eloquent authority.

Watts said he could never categorized himself as an adherent to any particular faith or religion. And he challenged his followers not to regard him as a teacher or guru. In his autobiography  In My Own Way, he describes himself as a shaman wandering the jungles of religion in the great illusion and hoax of life.  He professed himself to be simply the ego that is Alan Watts, playing his part in the cosmic joke all while laughing at “the incongruity of such a clown being God in disguise.”

He was utterly thrilled by the mystery of being, which became his supreme fascination. Through sitting and walking meditations, Watts discovered his own profound states of awareness arising from the mystical silence of the mind.  A man of eccentric ideas, he was a somewhat controversial public figure, yet his inner nature was quiet and reserved.  He would have preferred the contemplative life of a Yamaboshi hermit, the Japanese monk who dwells in the forest worshiping the wilderness.

In 1953, Watts took to the airwaves when he accepted a Saturday evening slot on Berkeley’s KPFA radio station. As detailed by the Alan Watts Organization, “That year he began a broadcast series titled ‘The Great Books of Asia’ followed in 1956 by ‘Way Beyond the West’ — which proved to be quite popular with Bay Area audiences. Re-broadcast on Sunday mornings, the show later aired on KPFK in Los Angeles as well. To this day, the Alan Watts series continues to be broadcast and is the longest-running public radio series — nearly 60 years.”

In the 1960s, Watt’s became one of the premiere scholars at Big Sur’s Esalen Institute.  He explored human consciousness and psychedelics in works such as The New Alchemy (1958) and The Joyous Cosmology (1962).

Here in 2022, a window into the soul of Watts remains open. Be prepared to have your brain rewired as you listen to his timeless wisdom.  All it takes are a few strokes on the keyboard to “tune in, turn in and drop in” to this extraordinary philosophical entertainer.  Perhaps the ego, with its relentless attachment to the constant energy of becoming, might just experience at last a well deserved rest — even if only for an hour or two.