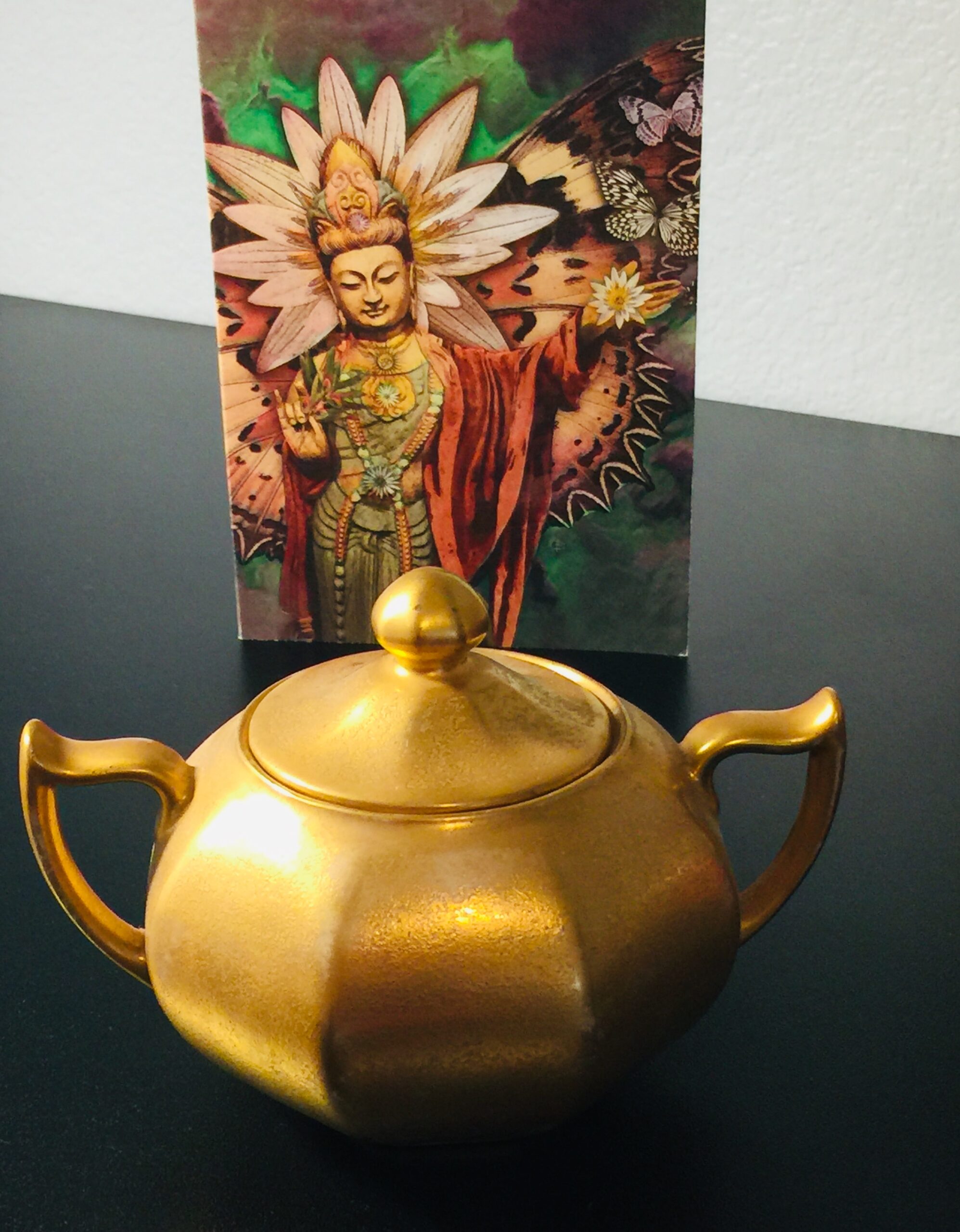 It has been said that meditation is listening to God, while prayer is talking.

Years ago I found a small gold colored pot in a thrift store. It spoke to me.  As it turned out, it was a sugar bowl.  There seemed to be something quite magical and charming about it.  It felt as if I had discovered an Aladdin’s lamp in which my wishes, dreams and hopes could be placed.

When I got home, I decided to repurpose this little sugar bowl and turn it into a prayer pot.  Thus, I began writing my hopes and prayers on small bits of paper and tucking them inside the golden vessel.  It became both an experiment and a means to “let go and let God.”

By writing down my concerns, I discovered that I could more easily turn issues over to a higher power, find relief, and remove worries from my head.  This method truly helped me to alleviate anxiety and feelings of helpless.  It also allowed me to actively engage the Universe in finding solutions to my problems.  It was comforting knowing that I was not alone, but had a powerful ally working by my side.

When others expressed their concerns, dreams, desires and predicaments to me, with their permission, I also included them in my prayer pot.  I had recently met a woman who told me that she had just applied for her dream job.  A new position for a midwife had opened up at a hospital on the island of Hawaii.  Given that she lived in Seattle, she felt it was a long shot, and admitted that there were many applicants.

I suggested she write down exactly what she wanted on a small bit of paper and offered to add it to my prayer pot.   She was surprised and grateful for my offer, and enthusiastically wrote down her wish.

Over the course of a year, the little pot became stuffed with so many snippets of prayers, it could hold no more.  The day came when I spilled out its contents and unfolded each bit of paper. I watched as magic too unfolded before my eyes.  Reviewing each prayer, I was astonished to discover just how elegantly and beautifully the answers to many of my needs had emerged. Truly, miracles had taken place and now I had a real record of them.

For example, I was reminded of a great upset that had consumed me for quite some time and caused great angst.  A cell phone tower had been slated to be built only a few hundred feet from my home. I did not feel safe living so close to this constant source of electromagnetic radiation, nor did my neighbors and other residents of our town.  We had all vigorously opposed the tower, none-the-less, it was approved by the county council and was slated to be built.

I was already considering my alternatives and whether I might have to move, when an appeal was filed and a second public hearing took place. Miraculously, the decision was over turned!   As I reviewed the words of my prayer, and reflected on the result, I was reminded and astonished at how the situation changed for the better, even when all hope seemed lost.

Another of my concerns involved a landlord/tenant lawsuit that dragged on for over two years. My insurance company, while denying the claim at first, reversed its decision and decided defend me. Everything was eventually settled without additional cost to me.  Again, clear evidence of a prayer answered.

Inside that golden pot were many prayers, those which related to my personal health, finances, or relationships, prayers for others, and blessings to the world.   Prior to utilizing this proactive method of writing things down, I believe that my modus operandi was to more or less muddle through one issue after another.  I would utilize prayer and mediation, but found that when something would resolve itself, I’d move on to the next issue du jour.  Thus, I was missing an opportunity to fully experience and express gratitude, and acknowledge the gift and miracle that had taken place.

Eventually I bumped into that acquaintance from Seattle once again. We were both at the airport in Honolulu about to board the same flight, heading to Kona. She approached me with a bright smile on her face and told me that she was moving to the Big Island to begin that dream job she had applied for over a year ago.  She also reminded me that I had put her wish in my prayer pot, which I had forgotten.

Having a prayer pot reminds me that prayer is not a useless or idle pursuit, but a means to engage with a great and benevolent power, the same power that created us.  Hebrews 11:1-6 tells us that “faith is the substance of things hoped for and the evidence of things not seen.”

Having a record of manifestation is not only fascinating, but it can help us develop trust, and encourage us to take a more active role in the manifestation process. Sometimes we simply can’t conceive just how much the Universe is conspiring to help us.