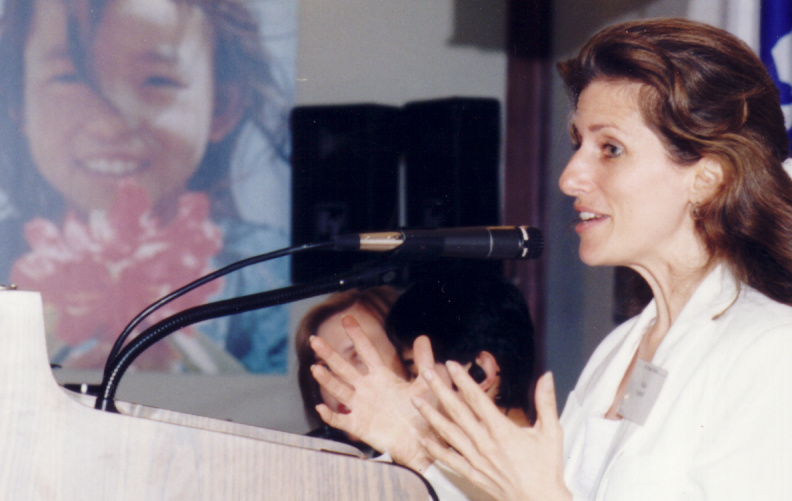 Education is very dear to my heart. I have always felt moved by the Latin origin of the word, educare, which means to draw out. Life has taught me that learning is fulfilling when it is interest-centered and enlivening to oneself, family, community, and global society.

I did not enter the teaching field with a degree in education. Instead, I fell in love with teaching when I volunteered as a grassroots leader with The Hunger Project. This global, nonprofit organization was founded in 1977 and is committed to the sustainable end of world hunger.

The suffering of millions who die daily of chronic, persistent hunger concerned me greatly.  Thus, with conviction in my heart, I set out to educate and empower young people about world hunger and to invite them to take a stand for food sufficiency and health for all.

Hunger persists because of a lack of public and political will. It is a problem that can be solved.  I was convinced – and still am – that hunger is unnecessary and should be outlawed once and for all. There is enough. It is up to each of us to make it a priority to end it, in whatever way necessary, wherever we can.

From 1982 to 1986 I delivered the “Ending Hunger Briefing” for over 7,000 school children in over 40 public and private schools in Hawaii.  I spoke on behalf of the hungry, giving them a voice and a face. Students were briefed on the facts, myths, and solutions about hunger, locally and globally.  The true purpose of education was realized in these gatherings: We experienced empathy, compassion, and civic responsibility to our communities.  As Aristotle said: “Educating the mind without educating the heart is no education at all.”

During these Ending Hunger Briefings music from The Hunger Project’s co-founder, John Denver was played.  After listening to his song, I Want to Live students were led in an eyes-closed, visualization of a day-in-the-life of someone who is hungry and lives in poverty. The students were deeply inspired and asked many questions, eager to understand and learn what they could do. Awareness and compassion grew in their eyes and hearts. They took a stand together for a world without hunger and signed their pledge cards: “Hunger exists. It doesn’t need to. You and I are the keys to ending it.”

The teachers and students all expressed gratitude. The food drive donations increased for the Hawaii Foodbank and other pantries. The program was requested at several private, religious, and public schools throughout the year.

Though I have led classes for over 30,000 students since 1982 in many subjects, it is the Ending Hunger Briefing program that transformed me into an educator. We are all capable of inspiring others and sharing wisdom that will better another’s life. Whether this is teaching at large or mentoring just one student, we can make a huge difference.

Would you like to contribute to a healthier society? Is there something you are passionate about that you would love to share for the good of others? Why wait? There is no time like the present to go for it.

Photo:  Paula Mantel, (1995) welcomes 126 youth from 26 countries at The Second Global Youth Conference for the End of Hunger, held at UNICEF House at the United Nations.

Have you gazed out on the ocean
Seen the breaching of a whale?
Have you watched the dolphins frolic in the foam?
Have you heard the song the humpback hears five hundred miles away
Telling tales of ancient history of passages and home?