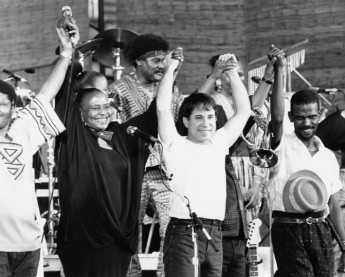 I have been writing about serendipity, and lately have gotten a bit lazy in my writing regimen. However, last night I serendipitously watched “Under African Skies” the story of how Paul Simon enabled art to magically do what it can under the right circumstances.

This was a PBS special which told of how Simon, in an effort to reach for a breakthrough idea, fused the magic of South African music and the music of the West.  It culminated in the production of “Graceland,” an album which was transcendent in its nature. While accomplishing this musical miracle, the law of unintended consequences reared its ugly head. He had failed to obtain the blessing of the African National Congress (ANC) in their battle against apartheid which led to protests and confusion.

His comment was that he had not paid any attention to politics and he and his South African musicians were only interested in the magic of the artistry: in other words he was producing art for the sake of art, not subjected to the control of politics and those who control politics. What happened? In the end, Simon and his African musicians toured the world to record breaking crowds and he was eventually exonerated by the ANC.

This is indeed a story well worth watching. It is particularly relevant today because our politics has moved into the realm of pure astonishment.  We seem to have a political class which does the bidding of the highest bidders and everybody else has to run for the hills hoping the ensuing financial or social  tsunami will not carry them out to sea.

When art comes along at this level, we see how it can heal at a transcendent level. At the end of the day Paul Simon may have done as much to end Apartheid as anyone, although he may never be given that much credit.

It is an irony of the times that when recession enters the picture, people look to get rid of “soft” costs because they can. Thus, money for design and the arts is often the first to be cut. Yet if you want to see how much we yearn for the benefit of design, look no further than the gadgets Apple pumps out. They are aesthetic marvels — not to mention what they do.

When art reaches that state of creating deep appreciation in the eyes and ears of the beholder, some archetypical-catalytic-force seems to spring forth which helps humanity take a giant leap forward.  So next time you have a say in whether an art form gets slashed, consider this viewpoint.  In the meantime, view this special on PaulSimon.com.  The world needs more efforts like it.   – Sanderson Sims, November 2019