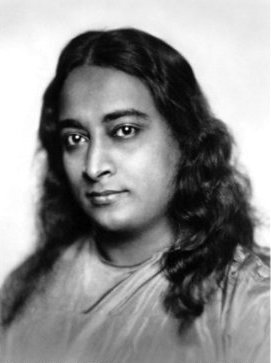 “By the practice of meditation, you will find that you are carrying within your heart a portable paradise” – Yogananda

From time to time great avatars incarnate on Earth to assist humanity in our spiritual awakening. Such a master was Paramhansa Yogananda, one of the most influential teachers of the 20th Century. This year marks the 100th anniversary of his arrival in the West.

Born in Gorakhpur, India on January 5, 1893 to a Bengali Hindu family, he was first known as Mukunda. By the age of 17 he had found his own beloved teacher and guru, Swami Sri Yukteswar, under whose tutelage he would train and study for ten years. He was given the name Paramahansa Yogananda: Paramahansa meaning “great swan” and Yogananda meaning “bliss through union with God.”

At just 26 years of age, Yogananda was sent on a great mission to the West – to teach the ancient science of yoga and meditation. He left India and set sail for America aboard the City of Sparta, landing in Boston Harbor on September 19, 1920, after a two-month voyage.  He had come as a delegate from India to attend the Seventh Unitarian Congress of Religious Liberals and gave his first speech in English, entitled The Science of Religion.  It it he addressed the fundamental unity underlying all religions.

American audiences resonated deeply with his message and soon Yogananda began lecturing across the country, filling halls and auditoriums beyond capacity. That same year, Yogananda created the Self-Self-Realization Fellowship to disseminate the teachings of India’s ancient practices. He became the first major Indian teacher to settle in America, and the first prominent Indian to be hosted in the White House by President Calvin Coolidge in 1927.

Although he arrived penniless, in just thirty years Yogananda had successfully built and spearheaded numerous ministries, schools, ashrams and a flourishing publishing enterprise. To this day, his teachings thrive and are of benefit to millions around the world.

Yogananda spoke of God as pure consciousness. By tapping into our own divine consciousness, humans can attune with their innate wisdom to bring about peace and transcendence in their lives.  Those eight qualities of God: Light, Sound, Peace, Calmness, Love, Joy, Wisdom, and Power are alive in every human being and form the pillars upon which super-consciousness evolves.

Yogananda knew that the Western mind was particularly filled with worry, distraction, material pursuit, and obsessive thinking. 21st Century author Anne Lamott describes the state of mind in which too many of us reside: “My mind is like a bad neighborhood. I try not to go there.”

The science of yoga and meditation is designed to calm the mind. The spine and brain are considered the “altars of God” and the heart, the terrain of joy and bliss. To experience God as light during meditation brings calmness to the mind, purifying it, and giving it clarity. Through a steady practice of yoga and meditation, one can find lasting peace and ultimately God realization, which is the true birthright of every individual.

In Metaphysical Meditations, Yogananda describes how, by closing the physical eyes and dismissing the temptations of matter, our two eyes become single and we are able to then perceive the God within.

“When both eyes are open we perceive duality, good and evil in this world. But with them closed and focused on the spiritual center between the brow, we perceive only the divine goodness of God and become filled with omnipresent light.”

In America in the 1920s, these ideas were considered unorthodox. As Yogananda’s popularity grew, he was put on a government watch list by FBI and British authorities from 1926-1930. Another reason for the surveillance was Yogananda’s long-standing friendship with Mahatma Ghandi, India’s great martyred leader.

In 1946, The Autobiography of a Yogi was published which detailed the remarkable life story of Yogananda, his early days in India and his mystical experiences there.  This classic has been in print for almost 75 years and translated into over 50 languages. In 1999 it was designated by a panel of spiritual authors as one of the “100 Most Important Spiritual Books of the 20th Century”.

Yogananda’s writings and teachings were highly influential in the spiritual revolution of the sixties. Devotees included Beatle George Harrison, Ravi Shankar and Elvis Presley. Apple CEO Steve Jobs first read The Autobiography of a Yogi as a teenager. Later in life he downloaded it onto his iPad and read it once a year. At his memorial, a copy of the book was given to each guest.

In his autobiography, Yogananda explains how yogis are capable of exiting at will from their bodies at the appropriate time. Yogananda’s “exit” was no different. On March 7, 1952, he attended a dinner at which the Indian ambassador to the United States and his wife were present. Yogananda gave an inspiring speech which he concluded by reading his poem, My India. Then he lifted his eyes to the spiritual center of the forehead, his body slumped to the floor, and he departed this earthly world. The cause of death was heart failure.

It was reported that 20 days after his death, Yogananda’s body showed no signs of deterioration. A notarized letter from the mortuary director of Forest Lawn Memorial Park confirms this phenomenal state of immutability, and that no odor of decay ever emanated from his body. The report was widely circulated in newspapers and magazines. Yogananda’s remains are interred in the Great Mausoleum at Forest Lawn in Glendale, California.

In 2014, the documentary, Awake: The Life of Yogananda was released in major theaters, garnering multiple awards at film festivals. Today, thanks to Yogananda’s Self Realization Fellowship and to the Ananda Communities, there are abundant resources available to those wishing to study these life changing practices. With devotion, one can discover an internal and eternal source of ever new joy and bliss.

Perhaps the most courageous thing any of us can do in this lifetime is to become conscious. This is the hero’s journey Joseph Campbell so eloquently spoke of. If we are still searching for meaning in our lives, and an answer to why we are here, we need look no further than to become self-aware and self-realized.