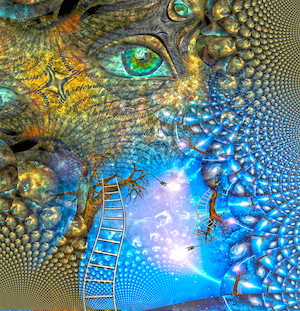 What Do We Believe?

Various international studies conclude that somewhere between 85-93% of the world’s population believes in God. According to an April 2018 study, conducted by the Pew Research Center, 9 out of 10 Americans believe in a higher power, but only a slim majority believes in God as described in the Bible.

In the words of David Foster Wallace author of Infinite Jest, “In the day-to-day trenches of adult life, there is actually no such thing as atheism. There is no such thing as not worshiping. Everybody worships. The only choice we get is what to worship.”

Should it be surprising that so many of us believe in a higher power?  After all, life is profoundly mysterious and magical.  We live in a universe that is 13.8 billion years old, which had its beginnings when one atom of infinitesimal mass exploded. Contained within this one atom was all of time and space.

And that is just for starters.

We dwell on a planet that travels at a speed of 67,000 miles per hour within a solar system that moves at 515,000 miles per hour. Our miraculous bodies contain 37.2 trillion cells, all of which are in constant communication with one another.  Our hearts beat an average of 4,800 times per hour, so if you live to the age of 80, that’s over three billion times!

Nature’s exquisite geometry and coherency is nothing short of astonishing.  So is a baby’s smile.  No wonder this precious human birth is a privilege.

During his NASA space flight in 1971, Apollo Astronaut Edgar Mitchell landed on the moon and spent 216 hours and 42 minutes in space.  While returning to earth he had a powerful experience, an epiphany in which he became aware of the spirit beyond creation.  Inspired by this life-changing event, Mitchell went on to found The Institute of Noetic Sciences, whose mission is to explore the connection between science and spirituality.

Albert Einstein said, “The most beautiful and most profound emotion we can experience is the sensation of the mystical. It is the sower of all true science. He to whom this emotion is a stranger, who can no longer stand rapt in awe, is as good as dead.”

Einstein’s contemporary, German theoretical physicist Max Planck was also deeply inspired by the mystery between religion and science.  Planck originated quantum theory for which he was awarded the Nobel Prize in Physics in 1918.  In his words:

“There can never be any real opposition between religion and science; for the one is the complement of the other. Every serious and reflective person realizes, I think, that the religious element in his nature must be recognized and cultivated if all the powers of the human soul are to act together in perfect balance and harmony. And indeed it was not by accident that the greatest thinkers of all ages were deeply religious souls.”

Today’s developments in the field of quantum physics or quantum mechanics provide incredible insight into the theoretical “mind of God”.  Mathematics is approaching models that attempt to explain how matter operates within a unified field of oneness. Mathematical descriptions of wave-particle duality, and the interactions of energy and matter, illustrate that atoms are not tangible matter, but energy arising from possibilities in a field of consciousness.

Every little proton in an atom is aware, omnipresent, and connected to all other protons in the universe.   Atoms influence each other without being in direct physical contact; they exist as waves of possibility, united by an invisible force that is self-organizing.

Quantum physics tells us that we are particles of energy. Using the language of the heart, the mystic poet Rumi wrote:  “You are not a drop of water in the ocean, you are the entire ocean in a drop.”  Fourth-century grammarian and philosopher Marius Victorinus stated that the universe is “an infinite sphere, whose center is everywhere and whose circumference is nowhere.”

Delving further into the mystery of quantum physics, scientists tell us that matter does not actually “exist” on the atomic level – it is an illusion, appearing and disappearing all at once.

Religious texts advance similar ideas. Maya is a fundamental concept in Hindu philosophy, which originates from the Advaita (nondualistic) school of Vedanta.  Maya is a Sanskrit word which means “magic” or “illusion” referring to the magic power with which a god can make human beings believe in what turns out to be an illusion.

Inventor and futurist Nikola Tesla said: “If you want to understand the universe, think in terms of energy, frequency and vibration.”

“99.999 percent of matter is space. It is space that defines matter, not matter that defines space,” says scientist and mathematician Nassim Haramein, Director of Research at The Resonance Institute.  “Space is what connects all things.”

In his book “The Everything Answer Book”, theoretical quantum physicist Amit Goswami suggests that quantum physics is not only the future of science, but it is also the key to understanding consciousness, death, God, psychology, and the meaning of life.

The fundamental theory of Perfection is that between the laws of matter and consciousness, we are centered in the fulcrum.  Because everything is interconnected through an inherent unity, our consciousness and our actions matter.  What we think, say and do have an impact on ourselves and the world greater than we may realize.